For those who wonder if we were swallowed by mother earth....(that's a German saying)....we have good news: No we weren't - but very close to it.

The past year has been very challenging in many ways and the new one hasn't started less busy.

Vivienne's surgery and recovery, our cat having been diagnosed with Lymphoma and receiving chemo therapy every 3 weeks, building a new accessible home, starting Space2Thrive, a non-profit organization connecting children with and without special needs and a fellowship I was awarded with by the Institute of Community Inclusion at Boston University, to just name a few of those events have kept us on our toes to an never before reached dimension....

I have been receiving many questions and requests I wasn't able to address individually.

I understand that there is a huge need for an update on this site.
Most of the questions coming my way are about the trials Vivienne is participating in - they are pretty much the same.

In general, I am not allowed to share any trial specific information. However, I do not have any 'special' knowledge about plans made behind the curtains of Ionis (former ISIS pharmaceuticals). The participating families do not know more or less than what press releases or Ionis themselves share with the world.

However, what I can share is our own personal view of Vivienne's condition.

If  you are new to this blog and are interested in knowing about our daughter's journey please go back to the beginnings of this blog and start reading your way up. This blog contains pretty much everything I am able to share with you.

Let's get now to what I suspect you want to know when you contact me: How is Vivienne doing and is she still in the trials?

Vivienne is still receiving 12 mg of Nusinersen (formerly known as ISIS SMNrx) every 6 month.
Her last two injections were in April and September of 2015.

The two month following her hip surgery in June of 2015 were very challenging. Although her recovery couldn't have gone better for what she has faced, the fact that she was braced (luckily no cast) for such a long stretch of time has taken its toll on her.

It has taken a long time before she even considered putting a foot on the ground out of fear of pain.

Up until November of 2015 I was very skeptical whether she would regain strength in her legs and I started to doubt if we would see progress like we did after injections before the surgery.

Finally in November, 2 month after she received Nusinersen in September 2015, she started showing progress.

(On a side note: every time after receiving the drug we could see V picking up strengths after 2 to 3 month post procedure. Exception June 2015 when she had hip surgery, however it may have helped with recovery)

Although she currently isn't using her legs much, she started standing up for a few seconds without and a couple of minutes with braces. What is challenging after the surgery is the fact, that her hips were purposefully turned outwards by the surgeon and her knees tightened up due to the lack of movement. She is not able to stretch her legs completely through anymore, which makes standing and balancing the more challenging and difficult.
She recently received a dynamic night brace and we alternate legs each night in the hope to regain the ability to stretch out her legs.

A positive and very surprising outcome after surgery is her spine. She had 26 degrees scoliosis before surgery. Her most recent x-rays show a perfectly straight spine - it's like a miracle. Fixing the hip has corrected the spine. If that isn't wonderful ??

Now back to her gaining abilities.

Where we really see a pick up in strength since November is her upper body, trunk, arms, head, neck and hands...you name it. Wohooo....before surgery she regained strength to being able to come and remain in the cat position and she was able to lift up one hand and remain up on legs and one arm. She was even able to move forward 1 to 3 steps before working herself back into a sitting position.

Now she picked up in speed moving around, getting into a sitting position from lying on either her back or belly, she can now crawl several steps and she is able to walk on her knees across the room. If she still would be a couple years younger, which means shorter and weighing less, she would be taking steps on her feet.
But what this has shown us is, that there is no need on giving up on her legs yet as she seems to regain strength.

She is also able to let her body fall forward from the high kneeling position and catch her body weight with her arms on the floor ending up in a cat position. I hold my breath every time she does that out of fear she will smash with her face to the ground...but she doesn't.

Stay tuned I am planning on taking a few new videos of her accomplishments and post them to her you tube site. I will put the links up on this blog once I had a chance to post them. Please be patient I will try to do it as soon as I can squeeze it in.

At her IEP meeting in school the OT services has been actually crossed off her special Ed plan as she  performed same or even better than her typical developing peers.
She still receives PT of course. We are not cured, but the trend is very encouraging and uplifting not only for us parents but for Vivienne and hopefully for everybody reading this.

If her achievements are caused by the drug, you ask me?
She definitely is not following the rules of SMA and published data so far is very encouraging as other children also show increase in strength after taking the drug.

This should cover her most current achievements.
If you have questions beyond what the blog has covered so far please post them here. If I can answer them I will and everybody reading will benefit from the answer.

Stay tuned for the videos, I know you will enjoy them ;-)


Posted by Vivienne Annika at 4:20 PM No comments:

Her hips, ecpecially the left side were getting worse and she didn't want to put her legs on the floor at all anymore because of the discomfort and increasing pain.

The surgery went according to books. She was supposed to be in for about 10 to 12 hours and at the end she was out after just 5 hours. This is great as being 5h sedated instead of 10 is so much less invasive on her body. She was extubated immediately after surgery. yay!

The 1st week was the toughest, still pain in week 2, but week 3 was already so much better. Her scars are healing beautifully.

The brace is currently the largest challange, especially at night. She keeps on waking up screaming and it is hard to determine whether it is discomfort or pain or a bad dream as she refuses to talk. At this point I think it is mostly discomfort. we wrap her on pillows and try to lay her down according to her directions. At some point the brace pushes into her skin and she wakes up several times a night.

We all are pretty exhausted but happy she is healing so well. We started water therapy last week and she was doing beautifully, getting adventerous and trying out different things in the water.  We are having her follow up appointment next week and are curious how much longer she will need to stay in the brace.

Let's hope she will regain abilities and will go back to standing. She definitelly seems strong, especially her upper body looks great.

I am sure being part of the trials helped with the smooth outcome and recovery process after surgery.

Visit our Team page to find out more.
http://events.curesma.org/site/TR/Events/General/3462995… 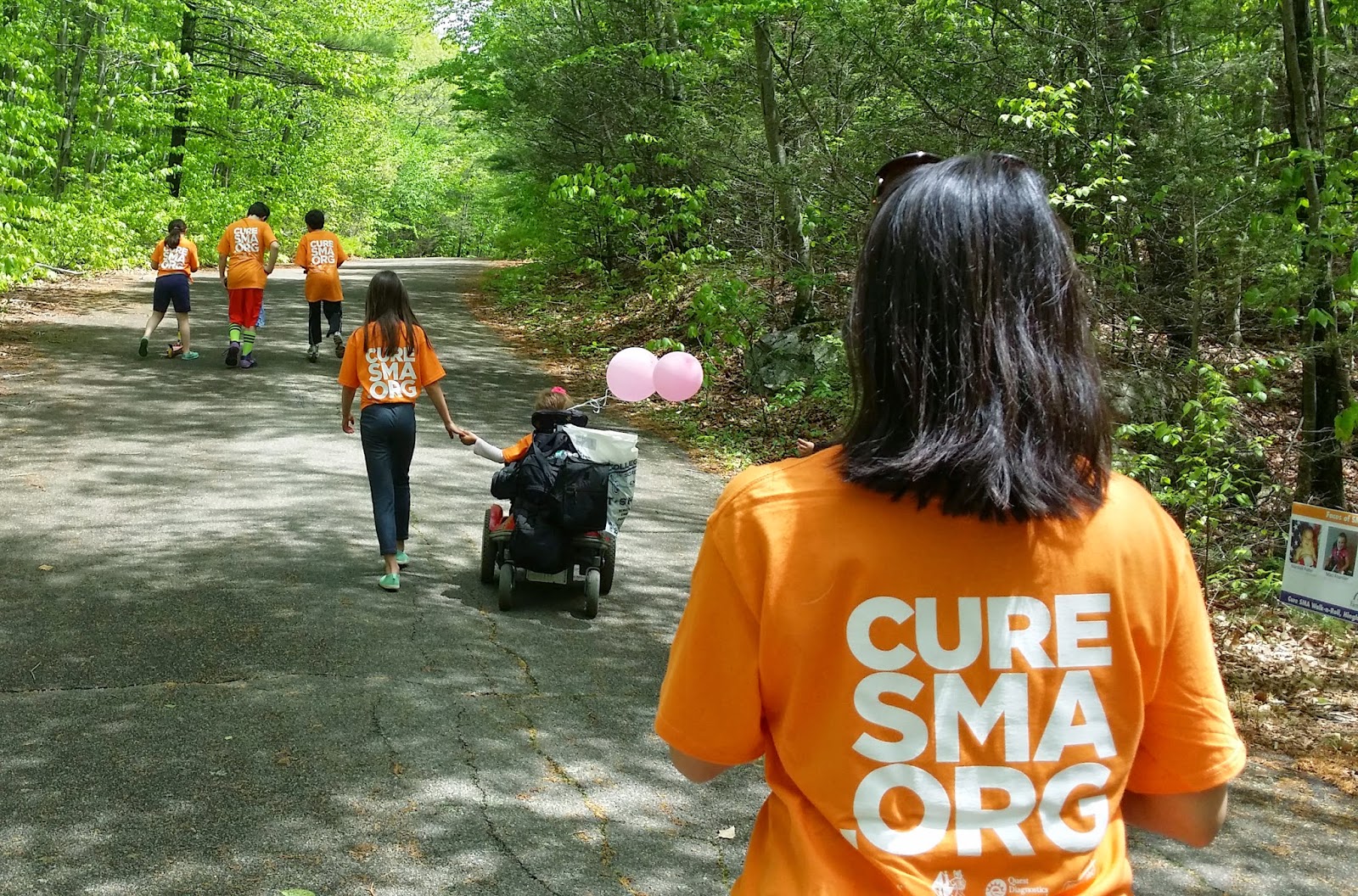 I have started a non-profit foundation called Space2Thrive which serves all children with and without disabilities to connect and grow beyond limitations.

The more likes I get the higher are the chances I can attract great sponsors to create playgrounds, spaces and events for all children to be included in their communities.

Thank you so much for your consideration to support our mission.

I truly believe we all can make a difference in this world and it can start as easy as a 'like'.

Posted by Vivienne Annika at 11:49 AM No comments:

As of January I incorporated the Space2Thrive Foundation.

Space2Thrive Serves Families And Children Of All Abilities.

Our MISSION is to create spaces and events where typical children AND special children, living with disabilities and serious conditions and their families can connect and engage in a way that creates an environment of compassion and equality for everyone to thrive, learn from each other and grow beyond limitations.

The webpage is still under construction, but the home, about, our story and contact pages are up.

Feel free to contact me if you want to learn more about our work
http://space2thrive.org/contact-us/

Posted by Vivienne Annika at 5:11 PM No comments:

I appologize for the break. A lot of things are going on. Vivinne is doing very good. Her upper body strength is fabulous, her legs seem strong, but she doesn't want to stand and has increasingly discomfort in her tighs. This is very likely related to her hips she needs surgery on. I have a couple of videos to post, and will do so soon. Thus stay tuned.

Unfortunately we still do not have a surgery date for her hips, but hope we hear from the hospital soon as the surgery was planned for June.

We all came down with influence A i Disney World, dispite flu shots. Vivienne was holding on very long, but eventually she also started showing symptoms. However, as she was the last one to catch it, we were able to act quickly and she had a very mild version of it...cannot say the same for myself. After 3 weeks I am still caughing my brains out. I am so done with it.

Vivienne's Van Raam bike arrived! Yay! Now we have to wait for 6ft of snow to melt to being able to use it, so far we are still getting snow every 2 days...

In one month Vivienne will receive the next  and so far last approved dose of the trial drug and then we will have to wait and hope for further approval. Let's pray and hope that she will continue receiving the drug on a regular basis.

I will keep you posted.

Vivienne Annika
I am the most adorable angel ever walked on earth. I am determined to fight the obstacles I am facing so early in my life!